Broadside sailed onto the scene in 1972, to mark the tercentenary of the Battle of Sole Bay, and its strong, fruity flavour was an instant hit. It’s a taste that’s endured and this year it reaches a landmark birthday, as we celebrate its 50th.

Adnams Chairman, Jonathan Adnams recalls that his father, John Adnams was at the heart of the week-long event. “My father would have been Adnams Managing Director then. He was very much involved with organising things, as was Dennis Ball our Chief Engineer and John Barber Snr; particularly in the building of the three field guns for a ceremonial firing. The original idea was to fire the Gun Hill Cannons but there was concern the process would damage them. I can imagine Dennis Ball, pint in hand saying: "No problem, Mr John (he always referred to my father as 'Mr John,' even in the pub), we can build our own field guns.”

“John Barber undertook the carpentry work and the role of Gunnery Sargent Major, Dennis and the Adnams Engineers produced the necessary iron work for the gun carriages, then refurbished and re-bored three old cannon barrels recovered from various Southwold pubs, where they were being used as bollards. The special effects charges and circuitry was produced by ordinance experts from Her Majesty’s Armed Forces. There were big bangs and plenty of smoke for the crowds.”

Broadside was released as a one-off cask beer for the week. It was liked by all, but at 6.3%, perhaps a bit too strong. Afterwards, the board decided it would progress in bottle format. Due to its continued popularity, the brewing team was later tasked with creating a new recipe that delivered Broadside’s taste bud bombardment at a lower strength. The bottled beer remains the strong original (as it says on the label), but the 4.7% beer in cask shares its ruby red colour and rich fruitcake taste.

If Broadside was released today, the brewing team believe it would be to a fanfare. Our quality control tasting sessions always end with Broadside, whether it’s due for tasting or not. Head Brewer, Dan Gooderham, has only good things to say: “Broadside is the real treasure at the heart of the brewery. It’s the perfect style of beer to brew with our yeast. This is a favourite for all the team, whether brewing or tasting it at the end of each morning taste session. We all play a game to guess how long it has been in a bottle when we do the shelf life tasting and it never ceases to surprise.”

Broadside is brewed with First Gold hops, for their cinnamon-like aromas and marmalade flavours. Black and chocolate malt is used to darken the beer; and pale ale malt provides its malty characteristics, as well as fermentable sugars. The mashing regime in the brewery is set to retain a lot of un-fermentable sugar, which gives Broadside its rich sweetness and full mouthfeel. In fermentation, Adnams house yeast gets to work, and charges the brew with its famous characters of Christmas.

Broadside’s powerful versatility can also be seen in use in other Adnams products. From marmalade to Christmas pudding, it can truly hold its own. It is aged in wood for Both Barrels and even endures distillation when we produce our eau de bière, Spirit of Broadside.

Fifty years on, it has a faithful following and its fanbase continues to grow. A ringing endorsement for its powerful flavour. An early brand ambassador for Adnams’ coastal connections, its design reflects its profile. With all guns blazing, there’s no escaping the taste. Broadside’s enviable longevity is thanks to its devotees, and the efforts of the brewing team in maintaining its quality over the years. We salute you all. 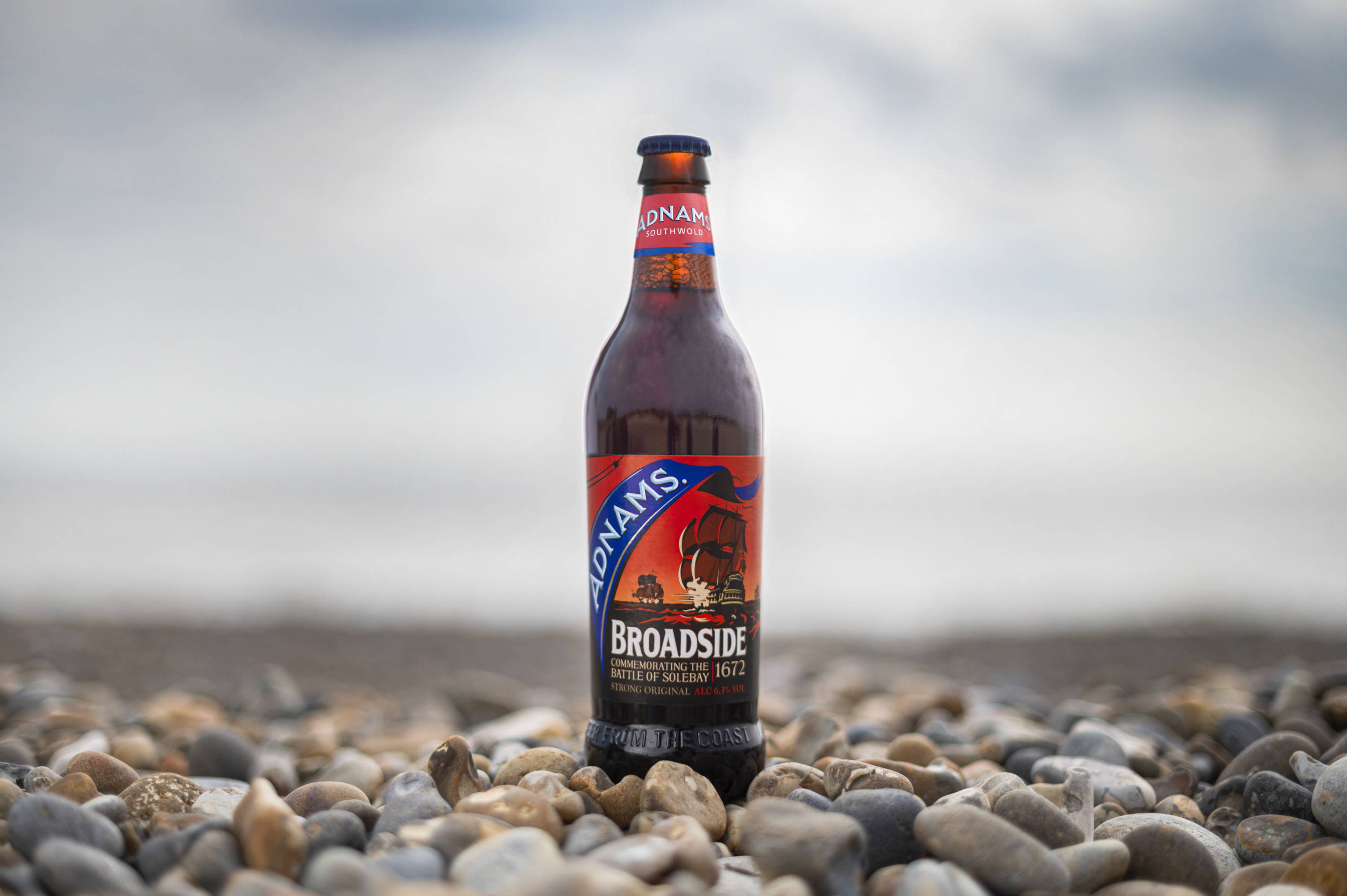 Let’s take a leaf out of the brewing team’s book and end on a high, with some Broadside.

Happy birthday. It’s been a blast.